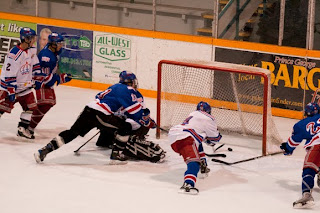 The Prince George Spruce Kings Intrasquad game saw 42 players don the Blue and White team jerseys for the opportunity to wear the crown for the 2010-11 season. The two teams consisted of three goaltenders, six defenceman and twelve forwards each. Nine vets played in the game alongside another ten that had been in at least one game in the BCHL last year. The bulk of the players were new to the Junior A game and wanted to leave a big enough impact on the scouts and coaching staff to earn another look at filling one of the 23 spots on the regular season roster.

After a series of practices, fitness testing and four scrimmages through the weekend, the players named to play in the Intrasquad game were still ready to go and didn't disappoint the fans and family members that came out to get a sneak peak at the 2010 edition of the team. With some skill and grit on display the teams skated to a 2-2 tie through forty minutes before Team White took over in the third period to win it 6-4 with an empty netter to seal the deal.

Team White opened the scoring when Faiz Khan was able to swat an errant puck out of the air from the side of the net. The thigh high shot was the only one to escape Prince George goaltender Bowman Rutledge during his stay between the pipes. At the other end of the ice, Cameron Large of Nanaimo was perfect on the ten shots directed his way and escaped unscathed after twenty minutes - the only goaltender to do so.

If the first period was a goaltender's duel, the second period was one highlighted by some physical play. Although new rules coming into affect for the 2010-11 season will see a marked reduction in fights, that didn't stop Scott Mackey and Trevor Esau from dropping the mitts at centre ice. Esau, who signed with the Spruce Kings in the off season after playing for the Revelstoke Grizzlies championship team, used his four inch height advantage to gain the decision and appreciation of the fans in attendance.

Team White took a two goal lead after an aggressive forecheck from Jordan Duncan on Justin Fillion that saw the three year vet take a spill and fall awkwardly into the end boards. Tanner Fjellstom was able to pick up the loose puck and deposit it into the net through Corey Koop of Squamish. At the other end of the ice Jeff Earnest banged in a rebound off a point shot from rearguard Isaac Davies. The younger brother of former Spruce Kings captain Zac Davies has been itching to follow in the skate blades of his older sibling since first giving it a try in the team's Spring Camp.

Earnest, who is a NCAA Division I committed player to the University of Alaska Fairbanks for the 2011-12 season, was just getting started with that shot as he would add another before the end of the second period to tie the game at two. Between the pipes, Corey Koop allowed one goal on ten shots while his counterpart in the second period, Kirk Thompson from Surrey, was beaten by Earnest twice while stopping the other nine Team Blue shots.

The third period was highlighted by speed, finesse and goal scoring with a total of six goals scored in the final twenty minutes. It started early when the Spruce Kings highly touted recruit, Chris Bodo stole the puck in the defensive zone and carried it the length of the ice down the right side wall before cutting hard to the net. Bodo's shot was stopped by Chris Solecki but he couldn't contain the rebound that went straight over to Nicolas DeSousa, restoring Team White's lead just 1:20 into the third period.

Defenceman were active throughout this game getting in on half of the goals with four assists and one goal. That goal came off the stick of returning player Jeff Datoff's stick to give Team White a 4-2 lead. Again it was Jeff Earnest that stepped up for Team Blue and was able to get his stick on the puck two more times including one on the powerplay to tie the game at 4 with less than five minutes to go in regulation time. Like his predecessor, Hunter Wiebe of Chilliwack was burned twice by Earnest but able to stop the rest of Team Blue during his tour of duty between the pipes earning the win. 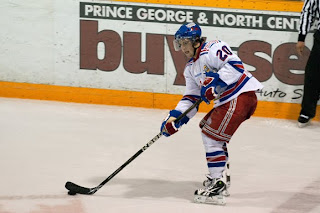 It was in the third period that Chris Bodo's internal clock finally clicked in on his new time zone with the high flying forward from Ontario showing off his speed, stick handling skills, play making abilities, defensive awareness and touch around the net. Unfortunately for Chris Solecki of Burns Lake, it was his turn to be in net when Bodo took over the game for Team White scoring the first of his two on the night and the eventual game winner. Bodo's second goal displayed the sportsmanlike character of this nineteen year old after he stole the puck in the defensive zone and took the length of the ice where he simply set it into the empty net and skated away with no celebration.

Top producers in the game were Jeff Earnest (4-0), Chris Bodo (2-1) and Nicolas DeSousa (1-2) with Faiz Khan, Tanner Fjellstrom and Jeff Datoff picking up a goal each. In Cameron Large was perfect while Bowman Rutledge and Corey Koop each allowed one goal against, Kirk Thompson and Hunter Wiebe were each beat twice and Chris Solecki had three get behind him. There was also an empty-netter for Team White. Ryan Benitez, who is expected to be the team’s number one, sat out the Intrasquad game.

With main camp now over, the focus shifts to getting the squad down to a manageable size for preseason play that starts on Tuesday and will feature five games in three rinks against three teams from three different leagues. First up will be the Quesnel Millionaires on Tuesday night at 7:00pm in the Prince George Coliseum. On the following night the two teams will play a neutral site game at the South Cariboo Recreation Centre in 100 Mile House. The Spruce Kings will then head north for a pair of games in the "Faceoff Fever II" weekend event at the Encana Events Centre in Dawson Creek.

The Spruce Kings are currently looking for volunteers to help out in all areas of game day operations as well as billet homes for out-of-town players. Criminal Record checks are required and the Spruce Kings provide financial compensation for those who open their home for a player during the 2010-11 season. For tickets and more information, please contact the Prince George Spruce Kings at 250.564.1747
Posted by Ron Gallo at 3:00 AM No comments: