The stage is set for the Spruce Kings. With the 2015/16 schedule being sent out this past Friday, the team now can plan for the coming season.

Things will kick off at home, as the newest members to the BCHL, the Wenatchee Wild, play Prince George at home September on the 11th, and 12th.
The team will close things out playing some important games, as eight of the final nine games will be against teams within the division. December18th to January 10th (with the Christmas break in between) will mark the teams longest road stretch playing eight games in a row away from home. The Coliseum will host it's longest stretch right after that though, as the Spruce Kings play from the 14th of January to the 6th of February at home.

The Prince George Spruce Kings are excited to announce the commitment of 19 year old forward
Connor Logan to the team for the 2015/2016 season.


The 6’0” 175lb Logan is from Victoria, B.C. and played last season for the Cyclone Taylor Cup and Keystone Cup championship team, The Campbell River Storm of The Vancouver Island Junior Hockey League (VIJHL).
Last season Connor Logan tallied 25 goals and 39 assists for 64 points in 40 games played split between The Peninsula Panthers and The Campbell River Storm after an early season trade to Campbell River. In 2013/2014 with Peninsula Connor tallied 28 goals and 47 assists for 75 points in 48 games played.
“Connor is a gifted offensive player who prides himself on hard work. His skills and work ethic will allow him to transition well into our league. He’s also a top notch individual who will fit in well with our group. It’s a good thing anytime you can add a player with Connor’s attributes to your lineup” said Spruce Kings General Manager Mike Hawes.
Connor will join the rest of his Spruce Kings teammates in mid August as they prepare for the team’s main training camp which will begin August 24th.
(Press Release from the Prince George Spruce Kings)


In a brief 10 game stint with the Powel River Kings last season (eight in the regular season, two in the playoffs), Logan tallied one assist.

From Sugar Kings to Spruce Kings

The Prince George Spruce Kings are excited to announce the commitment of 19 year old defenseman Adam Brubacher to the team for the 2015/2016 season.

﻿
Brubacher is a 1995 born player who hails from Elmira, Ontario. The 6’4” 205lb defenseman has played for his hometown Elmira Sugar Kings of the Greater Ontario Junior Hockey League (GOJHL) for the past three seasons. Last season he tallied 12 goals and 33 assists for 45 points while patrolling the blue line for the Sugar Kings.
“Adam is a big, strong veteran defenseman who is very good in both ends of the ice.  He will provide a lot of stability on the back end for us and will fit in well with an already strong group of returning defenseman. We’re fortunate because it’s not often that you can add a veteran defenseman with a combination of size, strength and a tremendous offensive upside. Adam is also a terrific young man who will fit in well with the core values of our organization” said Spruce Kings General Manager Mike Hawes.
Adam will join the rest of his Spruce Kings team mates in the middle of August as they prepare for the team’s main training camp which will begin August 24th.
Posted by Ryan Lep at 1:50 PM No comments:

The Prince George Spruce Kings are excited to announce the commitment of 19 year old forward
Corey Hoffman to the team for the 2015/2016 season.

The 5’9” 165lb Hoffman is a native of Syosset, New York and played last season for the Odessa Jackalopes of the North American Hockey League where he tallied 10 goals and 22 assists for 32 points in 34 games played. He is committed to Cornell University for the 2016/2017 season. The Cornell Big Red men's ice hockey team is an NCAA division 1 program that competes in the Eastern College Athletic Conference (ECAC) and is based in Ithaca, New York.

“Corey is a very talented player who will step into our lineup and inject some speed, skill and offensive ability.  He is also a tremendous young man who will fit in well with our group. He will have some talented forwards to play with, returning from last year’s team, which will help him develop and prepare for college hockey” said Spruce Kings General Manager Mike Hawes.

Corey will join the rest of his Spruce Kings team mates in mid August as they prepare for the team’s main training camp which will begin August 24th.

Please watch for more exciting player recruitment news in the coming days and weeks as the 2015/2016 squad is assembled.

(Press release from the Prince George Spruce Kings)
Posted by Ryan Lep at 12:30 PM No comments:

Adam Maglio is the next piece to the puzzle in Prince George.

Today it was announced that the Nelson, BC native will be joining the Spruce Kings for the 2015-2016 BCHL season as assistant coach. After playing in the Kootenay International Junior Hockey League for two years, he played in the NCAA for two years with Morrisville State College, and finally moved back to UBC where he spent two years in the CIS.

As any other coach would do, Adam then moved over to Hong Kong where he directed a hockey program for two years. Last season he made the move back to the Lower Mainland where he helped coach his old team at UBC.

I had the opportunity to chat with Adam, and get his thoughts on this coming season.


What are you most looking forward to this season in coaching the Spruce Kings?

“I’m personally really looking forward to coaching in the junior ranks. It’s a little bit of a different situation than coaching at the university level, so on my end I’m really excited on working with Mike [Hawes] and Chad [van Diemen] and developing our players.”

The BCHL is a league that has a large focus on development. How do you think you can help the players on this team develop as a recent player yourself?

“From an off ice perspective it’s preparing them for time management, a level of fitness they need to play at that level, and it’s just a transition going into the college ranks from a mental standpoint.  I think from an on ice perspective, integrating the right systems and how to play the game the right way, knowing how they’re going to move into a university level, and how they’re going to be coached at that level is important too.”

It's going to be both your's and Chad's first season coaching in Prince George, how do you expect that change to be both for the team, and yourselves?

“I think it’ll be a good transition, I know coming in to the first year on the job you’re definitely really excited, and I know we’re both really excited about the game. The BCHL is a really good level, and there are good players. I think we’ll bring a lot of energy, and for me there are some learning curves as well with working in a different league and a different level of player. Chad’s been there, so he holds the experience at this level and that’ll serve him well, and serve us well as a coaching staff.”

What is your best trait as a coach?

“I think I’m a real good communicator, I think that’s really key for me having open lines of communication with the players. Sending the right message and building the culture we want as a staff.”

What are your thoughts on Prince George?

“Prince George is a hockey community so I think as a coach, and as a player it’s somewhere you want to play. There’s a lot of community support, and it’s growing. It seems like a real good place to be.”
Posted by Ryan Lep at 6:00 PM No comments:

The Prince George Spruce Kings are pleased to announce the re-acquisition of 20 year old defenseman Stephen Penner from The Trail Smoke Eaters in exchange for future considerations. 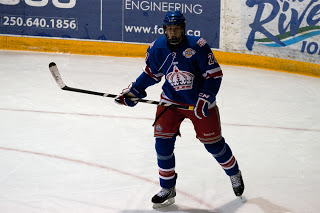 “Stephen is a big, strong, physical defenseman who can contribute in both ends of the ice. I wanted to add some size and strength on the back end and Stephen is a great fit for us. Obviously we are very familiar with Stephen and what he brings to a team. As important as his on ice ability is the fact that Stephen is a great person who is a tremendous teammate and is great in the room. He will provide some leadership and will contribute to an already strong group of returning defenseman’” said Spruce Kings General Manager Mike Hawes.

Stephen will join the rest of his Spruce Kings teammates when the team commences their Main Training Camp on August 24th at the coliseum.

(Press Release from the Prince George Spruce Kings)
Posted by Ryan Lep at 5:00 PM No comments:

The New Guy in Town

Hey it's Ryan Lepper here! The new Broadcaster and Communications Director of the Prince George Spruce Kings! I'm from down in Coquitlam (as you may know from the Express BCHL team) and I'm lucky enough to be calling play by play for the Spruce Kings this season!

Last year I called games for the Port Moody Panthers of the Pacific Junior Hockey League, and I'm hoping that this season won't bring a sophomore slump for myself. The picture I attached below is probably the best way to describe myself. The Canucks hat shows my love for hockey, the Luke Bryan shirt displays my country boy side, and of course being behind the mic is where I feel at home.

I just graduated from the Radio Arts and Entertainment program, so this job is my start into hopefully a very bright media career. In February I was in Prince George for the Canada Winter Games doing coverage with ViaSport, and as I was leaving I thought "Wow, Prince George would really be an amazing place to start my career." It's funny how things work out, and I really couldn't be more happy to be here! Play by play is one of the most enjoyable jobs I've ever done, and it's tough to call it work because even though there is a lot of effort put in pre and post game, the real action comes while calling the game, and that's just plain fun!

This blog hasn't been used for a little while, but I'm hoping to bring it back, and show off the Spruce Kings this season! I'm aiming to do as many game recaps, and feature stories throughout the season as possible. If there if anything else you want to see let me know, because this blog is for the fans! 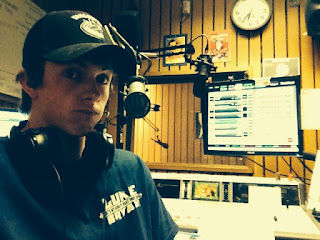