Life in the Fast Lane

While looking through some old files I came across a couple of newspaper clippings about Spruce Kings alumni that were about to embark on a NHL journey. I'm going to post them here for all to see starting with this first one of Brad Fast who played for the Spruce Kings in the team's early years in the British Columbia Hockey League. 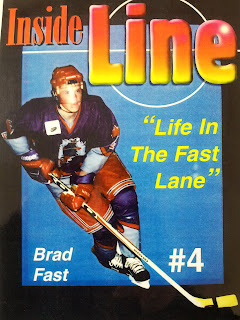 Hurricanes use third round pick for Spruce Kings defenceman

They almost had to call the paramedics out to the Fast household in Fort St. John on Saturday.

Brad Fast is still recovering from the shock of finding out he was chosen in the third round of the 1999 NHL Entry Draft by the Carolina Hurricanes.

In the final pre-draft rankings by both Central Scouting and The Hockey News, the Prince George Spruce Kings captain was listed to go early in the seventh round - among North American based prospects.

"Shocked is putting it lightly," said fast, who was the 84th player taken at the Fleet Center in Boston and the first Junior A player in Canada chosen. "I just can't believe I went so high."

Curiosity gave Fast the biggest shock of all. Around 1pm he went on the internet to see who went in the early rounds and when running down the list of third round selections - low and behold:

"I just wanted to see who went in the first round. I wasn't expecting to see my name for three or four hour yet, if at all."

Fifteen minutes after he spotted his name the phone rang. It was Carolina's head scout, Laurence Ferguson.

"He acutally said they were lucky I was still around and welcomed me to the team," said Fast.

"He was calling from the draft and said he didn't have much time so he would call me early next week."

Ferguson personally saw fast play during the regular season and during the first round of the playoffs in Penticton. He obviously liked what he saw in fast, who was voted the Interior Conference's top defenceman this past season with 73 points in 58 games.

The 6-foot-1, 180-pound Fast, who was one of four BCHL players drafted Saturday, will likely not attend the Hurricanes' training camp this fall because he has already committed to the next four years at Michigan State University.

"NCAA rules would allow me to only if I paid my own way but I don't think I'll be doing that," added Fast.

Fast says he will know more about the 'Canes plans for him next week.

"I'm committed to school, that would be my first choice. But I'm sure if they wanted me to do certain things I would have to consider them."

With the NHL Draft coming up on June 23rd in Pittsburgh, 105 players have been invited to the annual NHL Draft Combine in Toronto during the week of May 28 to June 2. On the list of players vying for an extra look from all of the NHL teams is Spruce Kings power forward, Jujhar Khaira (pronounced Juh-JAR CARE-ah).

A realitve unknown until he impressed at the Spruce Kings training camp in August 2010, now Khaira is a much sought after power forward with great puck possession skills and the ability to turn a scoring chance out of any play. Khaira is as dedicated off the ice as he is on the ice in both his physical conditioning and academic studies.

As a rookie with the Spruce Kings, Khaira impressed so much that he earned a NCAA Division 1 four year scholarship commitment to Michigan Tech that starts with the 2012-13 season. Playing with a skill set above his age, he also possessed the strength that left onlookers with the impression they were watching an 18 or 19 year old player.

In that first season with the Spruce Kings, the player that had been skipped over at the Bantam Draft went on to finish second in team scoring. A year later he had a breakout season playing on arguably the best line in the British Columbia Hockey League. The trio of Paul De Jersey, Michael Colantone and Jujhar Khaira combined for a total of 103 goals and 148 assists with Khaira finishing with 29 goals and 50 assists.

In the previous off-season Khaira worked hard at building muscle mass and came back to Prince George a few inches taller, 15 lbs heavier and the ability to use all of it to move and protect the puck. His dedication to being the best player he can has this draft eligible player working even harder this off-season looking for his opportunity to impress at the NHL Draft Combine and beyond.

All players at the Combine will be put through a series of physical tests from the bench test to the VO2 Max test and also interviews with potentially every NHL team. Jujhar Khaira knows that every aspect of the Combine will be tough, but he is determined to give it his all.

"It's a great honour to be invited to the Combine," said Khaira. "I've been training really hard to try to make a good impression there and I'll keep training all summer. I've also been preparing for the interview portion getting asked questions from a person that does that sort of stuff."

A true diamond in the rough, Jujhar Khaira has earned this chance to shine through hard work and determination. Good luck Jujhar. 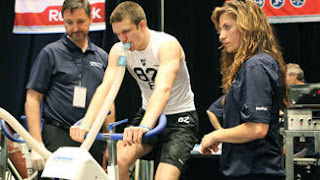 In the summer before the 2010 NHL Scouting Combine in Toronto, Plymouth Whalers center Tyler Seguin opted to give the VO2 Max bike test a shot "just for fun."

Those familiar with VO2 Max test know it happens to be the most grueling of all the tests at the Combine.

"I ended up throwing up after the VO2 (during the practice run)," Seguin said. "It's very difficult. You try to stay positive. I talked to guys who did it the year before my draft year and talked to guys who did it for practice. They said the bike tests are pretty hard. You have casual stuff, like bench press, push-ups, sit-ups, which you've done before. But the bikes are quite tough."

Seguin survived the bike tests at his Combine and eventually was drafted second by the Boston Bruins.

NHL Central Scouting's No. 1-rated North American skater in 2011, Ryan Nugent-Hopkins, lasted nine minutes on the VO2. That didn't stop the Oilers from taking him with the first pick of the draft.

It's not uncommon to see a few players cradling a trash can following the VO2 test.

"I think anyone going into the [Combine bike tests] wants to look as good as they can," NHL Central Scouting Director Dan Marr said. "There's some pride in it, and it does help them with their training to let them know this is where you need to be if you want to play in the NHL. You could look at it from another angle, too. If you test poorly at the Combine and test very good at the team's training camp, well, then they can say that you put in a heck of a summer with regard to your progression … that could be a benefit, too."

The largest ever Spring Camp has come and gone, leaving in its wake a list of players that are now working at getting ready for main camp and the start of the 2012-13 season. According to Mike Hawes, Spruce Kings General Manager, the number of players that came to the camp is a testament to what everybody is working towards with this team in Prince George and not just from within the team itself but also from the fans and corporate community as well.

Almost 170 players took to the ice at the Coliseum making the work of the coaches, scouts and management team that much more difficult. As Mike put it, the talent pool was very high at the camp making it that much more difficult to short list players for the Top Prospects game. That list was created and following the game a number of players were informed that they remained high on the Spruce Kings list and would be back for main camp.

A few other players were informed that they were ready to make the next step in their hockey careers and suit up for the Spruce Kings next season. I sat down and talked to Mike Hawes about all of these players and what they showed the Spruce Kings starting with a player that has already suited up twelve times during the 2011-12 season. 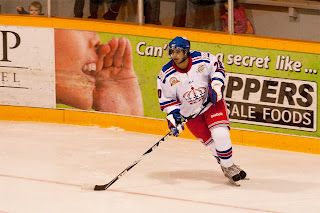 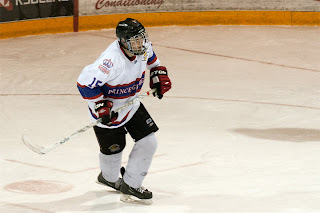 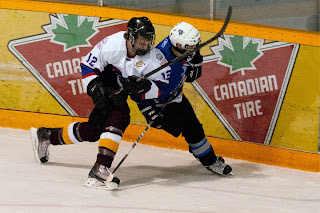 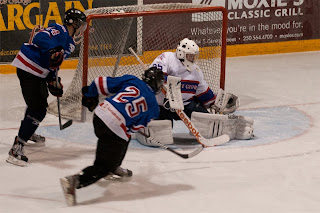 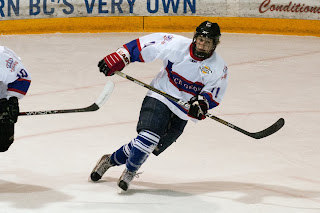 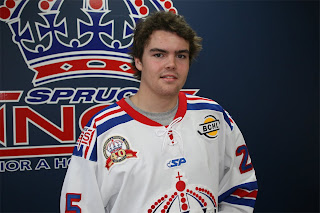 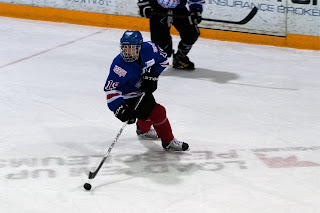 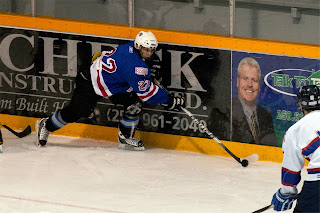